Which Self-Defense Systems is the Best? 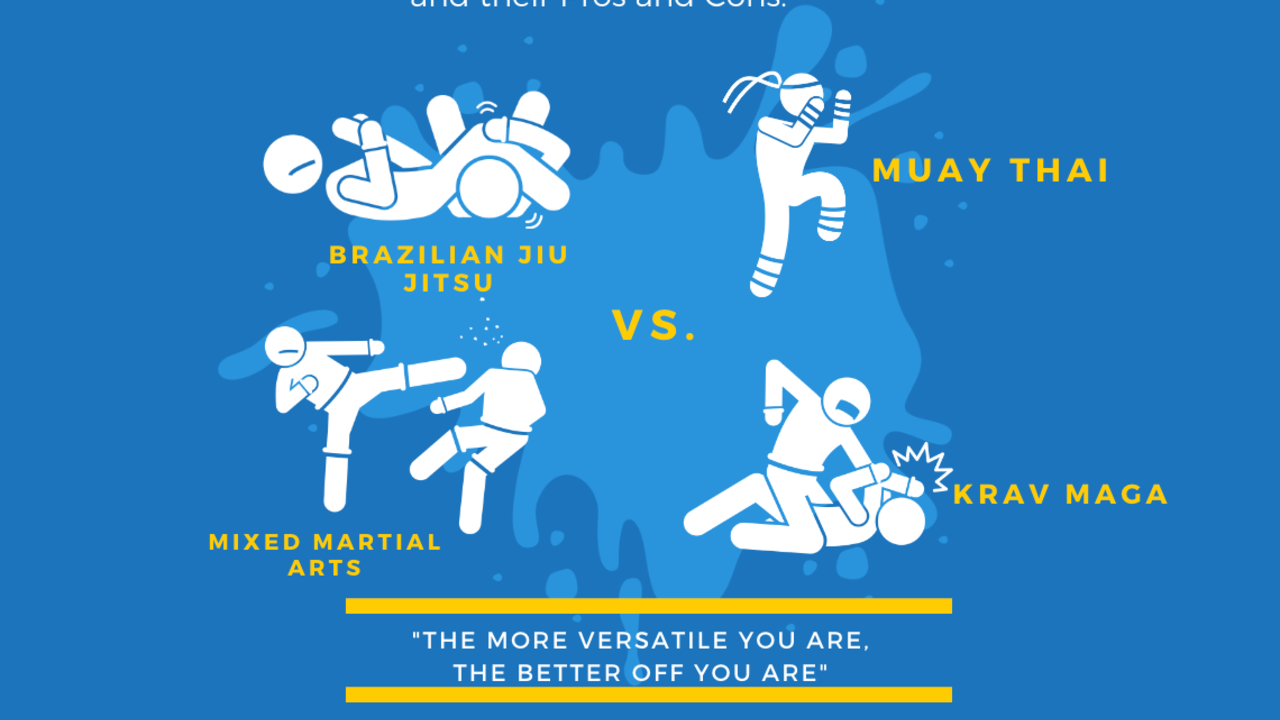 Which Self-Defense Systems is the Best?

I don’t think there has been a more important time in modern history to know self defense. A very common question I get asked is: what self defense is the best? Well, the true answer is: for what situation? The question can’t truly be answered by itself without a few follow up questions: For who? In what situation? Against whom?

I’m going to answer those questions for you and several more in this post in order to get you to understand the differences between different martial arts and their pros and cons and thus, make an educated decision for yourself as to what martial arts or self defense system is right for you.

BJJ, or Brazilian Jiu Jitsu, has become very popular in recent years since the Gracies introduced it in the U.S. in the Ultimate Fighting Championships (UFC). BJJ revolutionised the world of martial arts and is still a huge part of Mixed Martial Arts (MMA). However, due to its popularity, BJJ has branched off into its own sport and it continues to grow at a rapid pace. 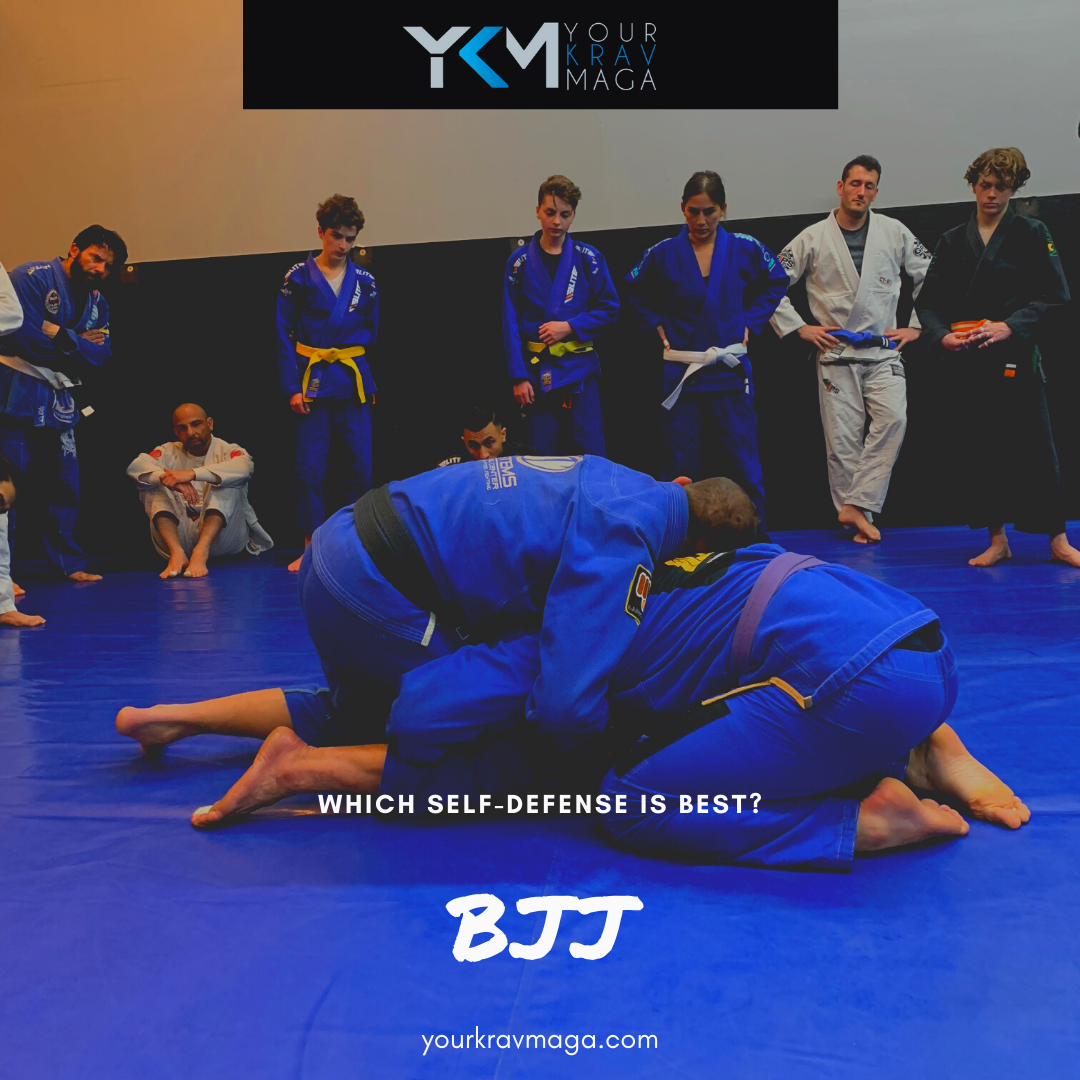 A very common structure of a BJJ class is learning a technique; drilling that technique; sparring, where you get a chance to implement the technique you have just learnt. Therefore, you get to actually ‘test” the technique at the end of every class. Because you’re always “rolling” (BJJ sparring) at the end of every class and because there’s no striking involved, you can go full out and see what actually works and what doesn’t. There’s no ambiguity or uncertainties; either you understand and have mastered the techniques or you haven’t.

Although BJJ was originally developed for street self defense, the modern day sport Brazilian Jiu Jitsu has no striking to it, which severely affects its effectiveness in a self defense situation. BJJ is also a grapple sport, which means the individual will almost always seek to take the fight to the ground, which is great if there’s only two people involved. However, if there could be more than one attacker, the ground is not the safest place to be, since you need to be mobile.

BJJ is a great self defense system for law enforcement, security guards, etc who needs to be able to control and subdue a person. BJJ works great in conjunction with a striking art, such as Muay Thai, Kickboxing and/or boxing. BJJ is a very fun sport for the whole family but it is also not a martial art I’d recommend for self defense purposes for a smaller female for various reasons. For example, it takes a lot of training and drilling to be able to submit someone. Yet, if a person is much bigger and stronger, it will be difficult to maintain a submission. Also, since most attacks on women are sexual attacks, the last place you want to do is go to the ground with a larger, male attacker.

Muay Thai, or Thai boxing, is the national sport of Thailand and considered one of the most brutal sports on the planet, involving punches, kicks, knees and elbows. Thai boxing has consistently grown in popularity in the Western world since the 1980s and is one of the main striking styles used by Mixed Martial Arts fighters. 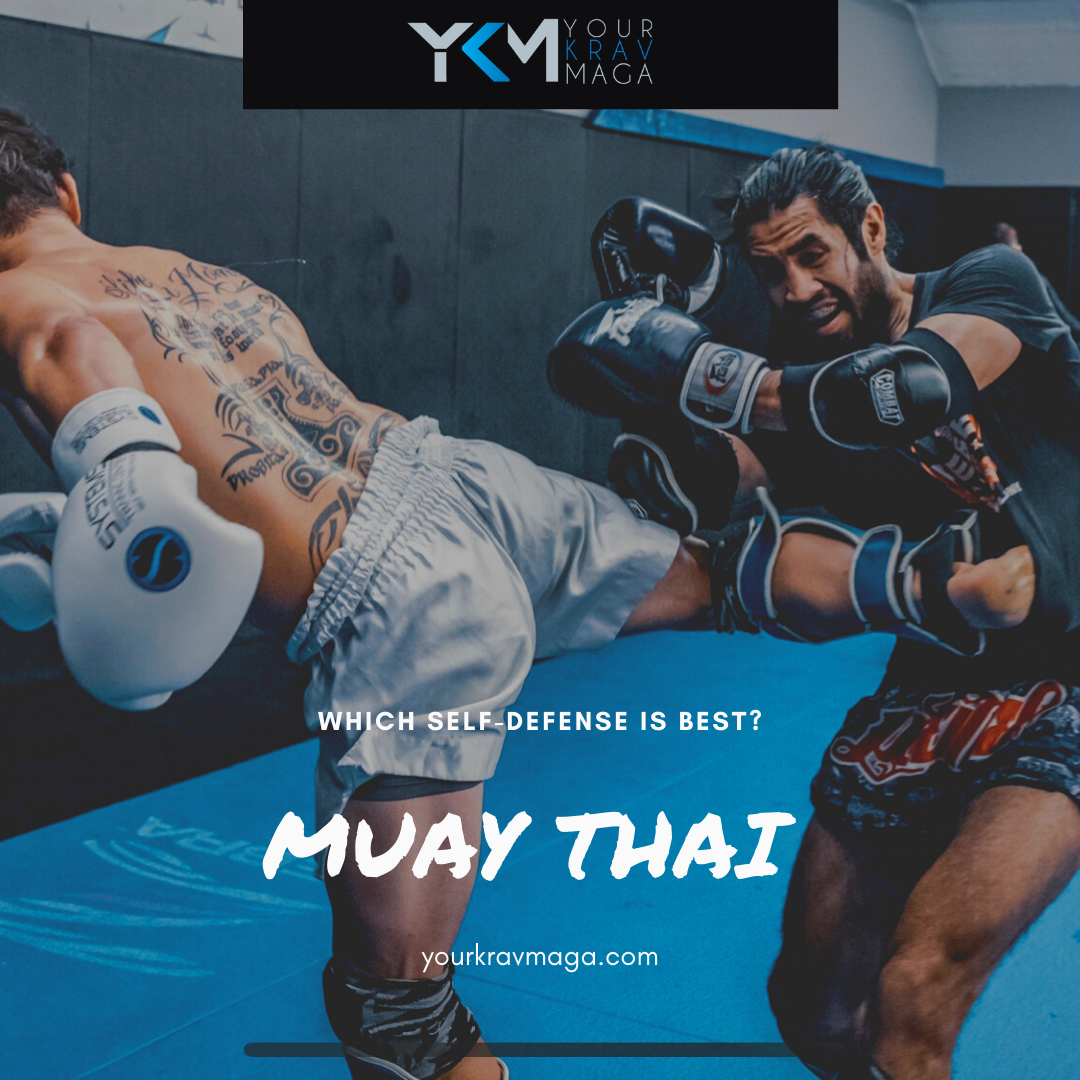 Thai boxing will train you both to be able to inflict some serious damage and to be tough, there’s no doubt about it. Few martial arts are as battle tested as Thaiboxing and since it includes sparring, you will get the real life application of what works and what doesn’t. The vicious Thai Clinch will also give you a good base for stand-up wrestling, almost like Greco-Roman wrestling.

Since Muay Thai is a sport, it will adapt you to its rules and becomes very sport-specific. Traditional Thaiboxing often uses very little footwork and more kicks than punches, since standing your ground and kicking scores more points. Also, there is no ground work, which means if a Thaiboxer gets taken to the ground, he or she will most likely be like a fish out of water.

Muay Thai is one of the best striking arts there is but for anyone who truly wants to learn self defense, the Thai Clinch and the knees and elbows should be incorporated. Muay Thai is great for any size, male or female, since it will make you a dangerous striker and stay standing, which is what you want to do in a self defense situation. Thaiboxing is less useful for most law enforcement situations, since striking should only be used in life-threatening situations.

You have probably seen it on TV at some point; cage fighting with its promotion being the UFC. In fact, people often mistake UFC for the sport of MMA when in reality, UFC is the promotion and MMA is the sport. As the name suggests, Mixed Martial Arts is a sport which has taken different styles of martial arts and mixed them together. Although there’s several different martial arts represented in MMA, it’s made of four main martial arts and combat sports: Boxing, wrestling, Kickboxing and Brazilian Jiu Jitsu. 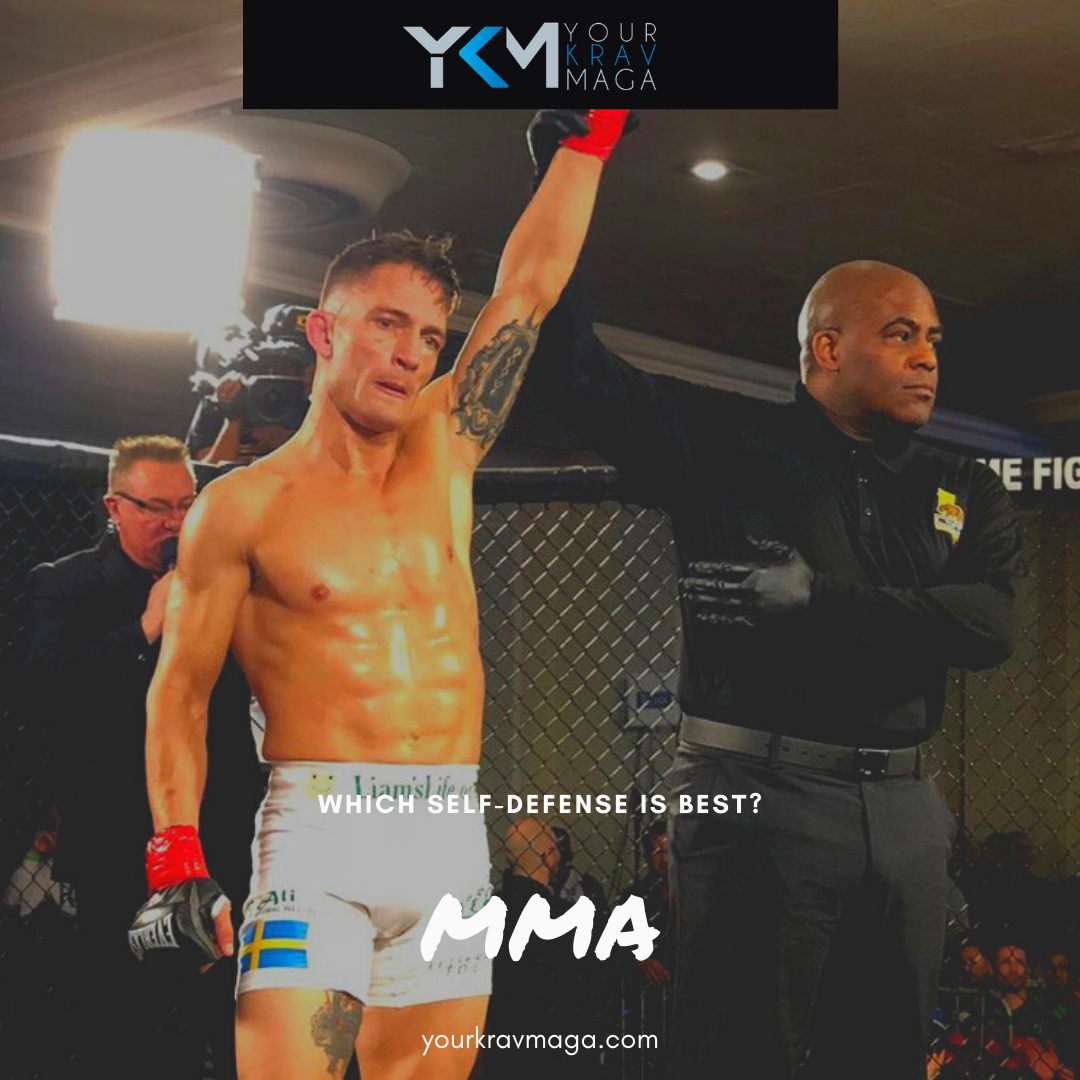 I’m a bit biased, since I am a professional MMA fighter myself but here’s the truth: If you know how to fight inside of a cage, you will know how to fight in the streets. Additionally, MMA fighters are some of the best trained athletes on this planet. If you are a talented fighter, you will be able to successfully defend yourself against 95%, if not 99%, of the world’s population and leave your attacker in the hospital. After all, the UFC’s slogan is “As real as it gets.”

Make no mistakes; you should try to avoid getting into a fight with an MMA fighter at any cost. However, MMA is still a sport, which means there has to be rules. In fact, there’s 27 rules MMA fighters have to follow, according to the Unified Rules. This is obviously to make a fight fair and to make sure that fighters aren’t permanently injured. Those rules include no eye gouging, no biting, no headbutting and no strikes to the groin. In a self defense situation, you shouldn’t look to fight fair; you should fight to get home safe. Moreover, as you might have guessed, training the various disciplines of MMA takes up an enormous amount of time which most people don’t have. Lastly, training MMA will make you an MMA fighter. Being a fighter will not always be the ultimate

Krav Maga is a self defense system that originated in Israel and is still the official self defense for the Israeli Defense Forces (IDF), as well as U.S. Law Enforcements. It rose in popularity due to movies such as “Enough” with Jennifer Lopez and “Blood Diamonds” with Leonardo Di Caprio. Today, there are several different Krav Maga associations that teach different variations of the self defense system. 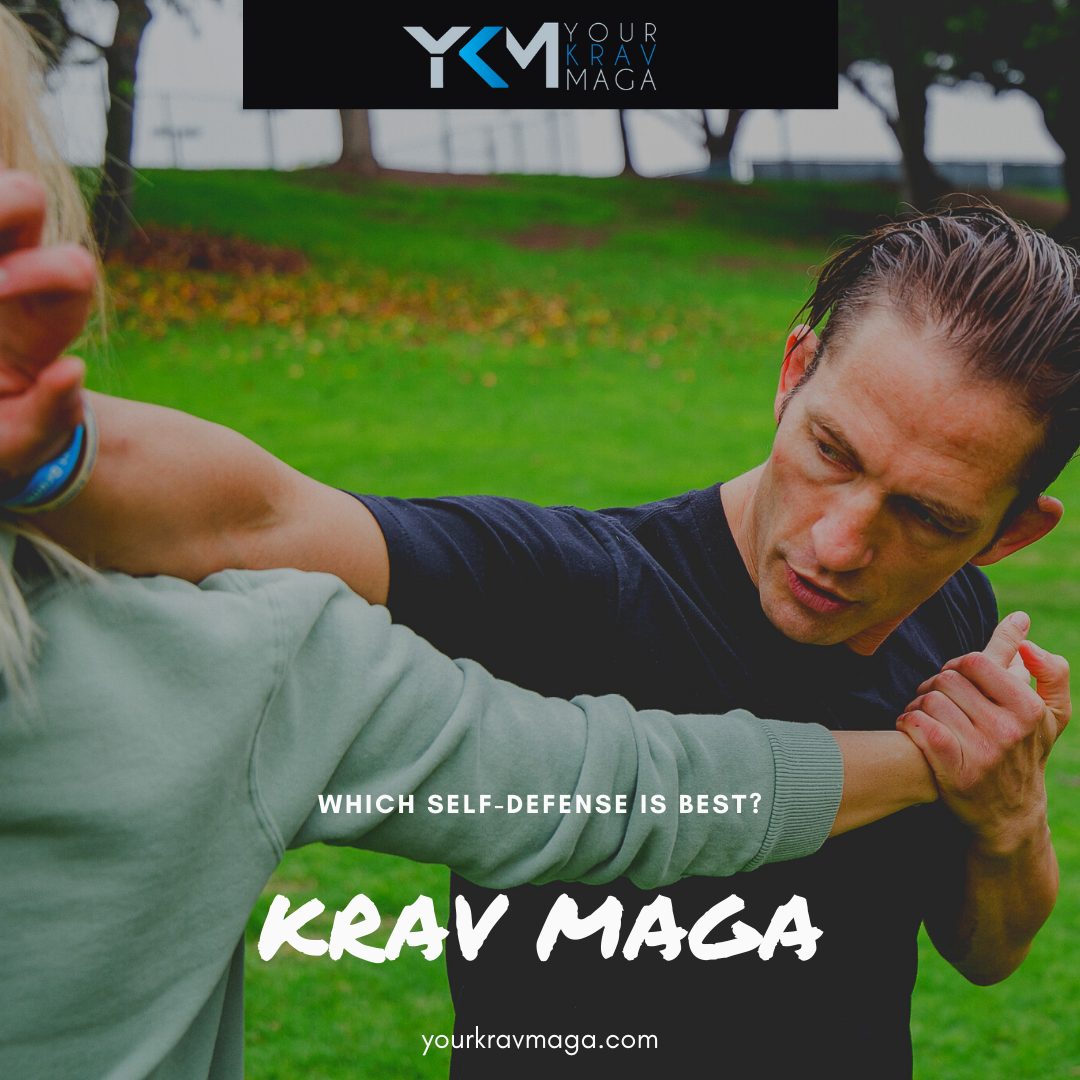 It’s a self defense system, which was designed to teach self defense. Thus, preparing the trainee for situations that sport fighting do not include, such as multiple attackers, weapons and one of the main differences: fighting when you least expect to fight, let alone want to fight. You might have restrictive clothing, you don’t have to warm up and your mind was somewhere else. The system will teach you to fight back with a fighter’s mindset, without necessarily training you to be a fighter. Sometimes, self defense is getting out of the situation.

Many Krav Maga locations teach self defense training without incorporating sparring. It is also often taught by individuals who have never been in a fight themselves, which makes it hard to understand what adrenaline and stress actually does to the brain and body. However, the main concern with Krav Maga in my opinion is that it hasn’t continued to evolve the way Imi had envisioned. Thus, many associations are continuing to teach very outdated techniques.

For the individual with a busy schedule who is looking for a fast, easy way to learn functional self defense, I would highly recommend Krav Maga. At the same time, you’ll get out of it what you put into it. If you really want to learn how to defend yourself effectively, you will have to stay consistent over a long period of time, say some 1-2 hours a week for at least a year.

At the end of the day, the more versatile you are, the better off you are. If time permits, I highly recommend combining BJJ, Muay Thai, boxing, kickboxing, Krav Maga and also functional strength and conditioning. Ultimately, it’s not about the martial arts but the martial artist! 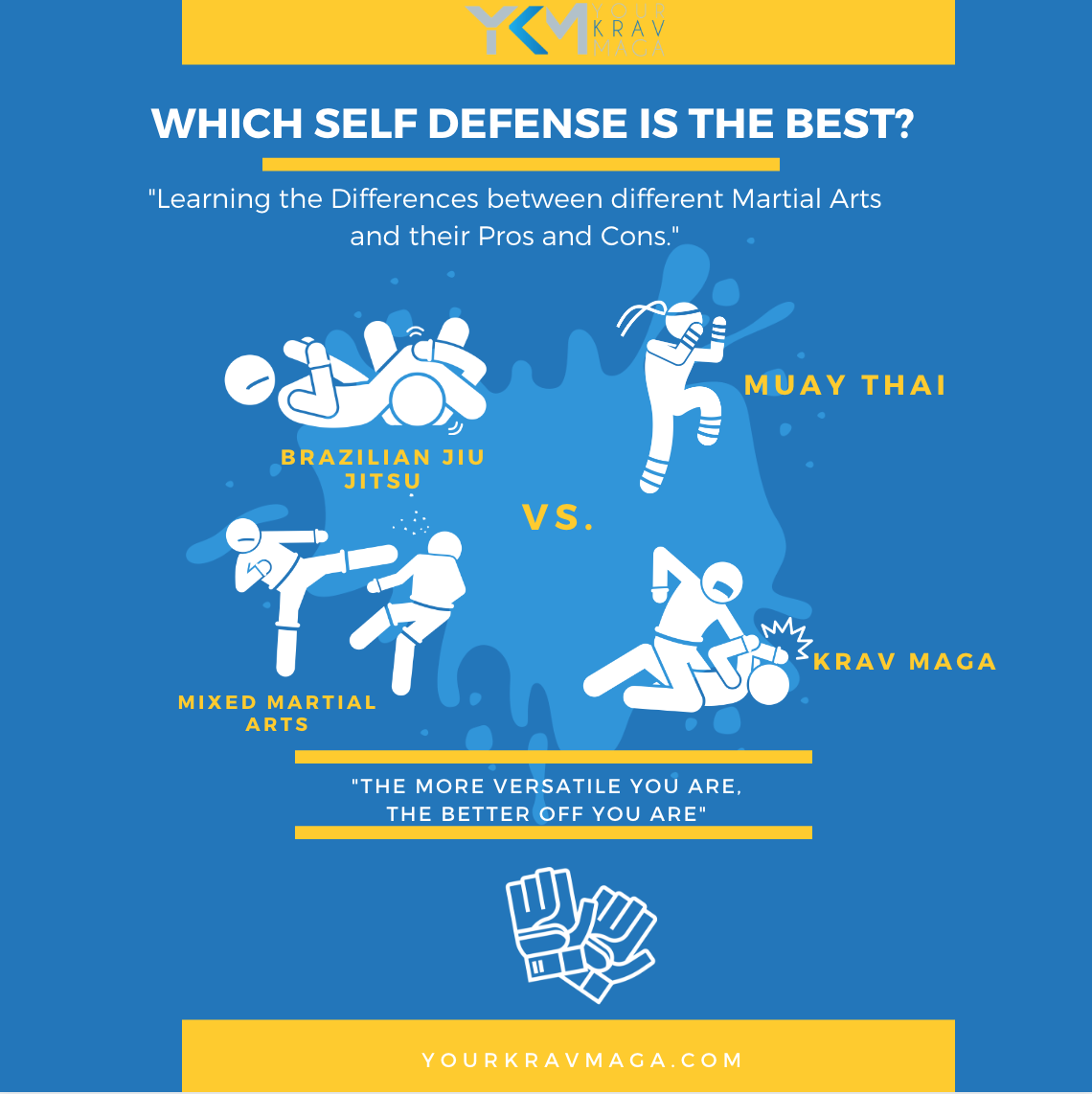